Why Kick the Goads? 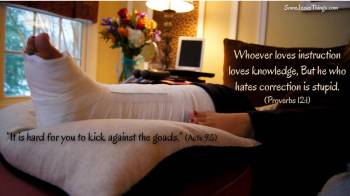 This begs the question… What are goads? A goad is made from a length of wood, blunt on one end and pointed on the other. A goad is used to urge reluctant animals into motion.

In bible times ‘to kick against the goads‘ was a common expression typically referring to an ox lashing out and kicking back against the herder’s prodding. The more the beast would kick; the greater the likelihood the goad would stab into the flesh causing pain.

To answer these questions we must take a look into Saul’s background. He was born a freeman in the free Roman city of Tarsus of Cilicia. He was born of his mother and father both native Jews from the tribe of Benjamin closely attached and following the tribe of Judah. He even referred to himself as Pharisee and ‘a Hebrew of the Hebrews.’ (Philippians 3:5) (Acts 23:6)

He was educated in the schools of Tarsus in philosophy and Greek poetry. Later attending the university at Jerusalem to study divinity and Jewish Law under the tutelage of the Elder or Rabban Gamaliel I; who was a leading authority in the Sanhedrin in the early 1st century. (Acts 22:3)

As if all of this background and lineage weren’t enough; he also became skilled in the trade of tent-making. (Acts 18:3) All of these combined, serve to establish that Saul was undoubtedly not an idiot. He was well versed with his hands as well as his head.

Saul as a Pharisee and a part of the Sanhedrin knew Jesus and His teachings. We know that Saul lived in Jerusalem while attending university. We also know that Jesus addressed the scribes and Pharisees who were from Jerusalem calling them hypocrites along with a strong chiding.

Then the scribes and Pharisees who were from Jerusalem came to Jesus, saying, “Why do Your disciples transgress the tradition of the elders? For they do not wash their hands when they eat bread.” He answered and said to them, “Why do you also transgress the commandment of God because of your tradition? For God commanded, saying, ‘Honor your father and your mother’; and, ‘He who curses father or mother, let him be put to death.’ But you say, ‘Whoever says to his father or mother, “Whatever profit you might have received from me is a gift to God”— then he need not honor his father or mother.’ Thus you have made the commandment of God of no effect by your tradition. Hypocrites! Well did Isaiah prophesy about you, saying: ‘These people draw near to Me with their mouth, And honor Me with their lips, But their heart is far from Me. And in vain they worship Me, Teaching as doctrines the commandments of men.’ (Matthew 15:1-9)

Saul and the Sanhedrin’s constant insurrection against Jesus was definitely kicking against the goads. The works, ministry, and teachings of Jesus haunted Saul. The ministry of Jesus as they crossed paths would most certainly strike a chord within Saul’s conscience. It goaded him, more and more as he resisted Jesus’s proddings.

We know this to be true because of the growing burning anger of Saul, the High Priests, and the Sanhedrin. In fact, this is the principle cause after Jesus’ death and resurrection that lead to Saul’s conversion to Christianity when he met the resurrected Jesus on the road to Damascus.

Then Saul, still breathing threats and murder against the disciples of the Lord, went to the high priest and asked letters from him to the synagogues of Damascus, so that if he found any who were of the Way, whether men or women, he might bring them bound to Jerusalem. As he journeyed he came near Damascus, and suddenly a light shone around him from heaven. Then he fell to the ground, and heard a voice saying to him, “Saul, Saul, why are you persecuting Me?” And he said, “Who are You, Lord?” Then the Lord said, “I am Jesus, whom you are persecuting. It is hard for you to kick against the goads.” (Acts 9:1-5)

Saul, ‘his Hebrew name’ now seemed to embrace and adopt the use of his ‘Roman name’ Paul which allowed him to approach and preach to the Gentiles as instructed by Jesus.

Saul literally saw the light that is the truth of Jesus the Christ. The soul searing works of Jesus burned deep into the Saul’s conscience. Saul choose to see himself as a new man on a new mission.

This changed man Paul, chose to quit fighting and kicking against the goads. Paul surrendered his life and self-will to Jesus. Paul was now destined to become a powerful Christian and witness for the Kingdom of God.

There are many denominations and religions that blatantly resist the proddings of Jesus. Some blasphemous sects even demand the belief in Jesus as a requirement for membership.

The Blasphemous Heretical issue comes from the fact that these false religions do not accept the proddings of Jesus as the Christ and risen savior. Jesus as deity in the Trinity that is One Monotheistic God.

Even the atheist kicks against the goads that numb their conscience to the majestic order of creation that surrounds their religious unbelief.

Call it what you want; a Crusade, Holy War, or Jihad in the name of Allah. Anyone engaging in these kinds of terrorist activities is certainly kicking against the goads of Jesus Christ’s teachings.

For look! The wicked bend their bow, They make ready their arrow on the string, That they may shoot secretly at the upright in heart. (Psalm 11:2)

But Jesus said to him, “Put your sword in its place, for all who take the sword will perish by the sword.” (Matthew 26:52)

Some are even convinced that they are doing the will of God. These kinds of people have been kicking against the goads so long, they can no longer feel the stabs of reality seeking to guide them to the truth.

Lead me in Your truth and teach me, For You are the God of my salvation; On You I wait all the day. (Psalm 25:5)

Unlike the Apostle Paul who saw the light. Satan has blinded the minds of those perishing in denial. Those who zealously fight and stumble around in the evil darkness that comes from Satan. Those who wish to bring about the eradication of all that brings glory to Christ the very image of God.

But even if our gospel is veiled, it is veiled to those who are perishing, whose minds the god of this age has blinded, who do not believe, lest the light of the gospel of the glory of Christ, who is the image of God, should shine on them. (2 Corinthians 4:3-4)

There are those who choose to commit all kinds of evil atrocities for personal and financial gain, while ‘all the while’ hiding it behind pseudo religious agendas.

Keep yourself far from a false matter; do not kill the innocent and righteous. For I will not justify the wicked. (Exodus 23:7)

Jesus never sanctions anyone to rape, murder, oppress, manipulate, or subjugate anyone. How can these false religions or belief systems say they know, love, or respect Jesus when Jesus only taught and preached LOVE!

There are many out there that say, “I am Christian and I do not condone violence or sin. Kicking against the goads does not apply to me.”

My question is… “Are you really sure?”

Have you truly submitted every area of your mind, will, and emotion to the Lord? Can you honestly say, “Jesus is proud of everything I think and say.”

Of Course Not! Anyone who sincerely pursues Jesus and being Christ-like must be earnestly re-evaluating their lives, thoughts, and actions.

This is why Jesus warns us to do our own head checks. We must think before we speak and evaluate whether we are in our flesh or representing Jesus as Christians. Jesus said, “Those things which proceed out of the mouth come from the heart, and they defile a man.”

When He had called the multitude to Himself, He said to them, “Hear and understand: Not what goes into the mouth defiles a man; but what comes out of the mouth, this defiles a man.” Then His disciples came and said to Him, “Do You know that the Pharisees were offended when they heard this saying?” But He answered and said, “Every plant which My heavenly Father has not planted will be uprooted. Let them alone. They are blind leaders of the blind. And if the blind leads the blind, both will fall into a ditch.” Then Peter answered and said to Him, “Explain this parable to us.” So Jesus said, “Are you also still without understanding? Do you not yet understand that whatever enters the mouth goes into the stomach and is eliminated? But those things which proceed out of the mouth come from the heart, and they defile a man. For out of the heart proceed evil thoughts, murders, adulteries, fornications, thefts, false witness, blasphemies. These are the things which defile a man, but to eat with unwashed hands does not defile a man.” (Matthew 15:10-20)

Many Christians are kicking against the goads without realizing it. Such as when one casts condemning thoughts against others, holds on to those secret sins, or falsely believes that they are keeping all the laws and commandments of God.

If you are completely honest with yourself and the Lord; you will feel the prick of the goad, seeking to reveal those things which stand between you and God.

Do not stifle the convictions that stab at your conscience. Every Pastor, Priest, Rabbi, Imam, and those who follow as members, congregation, or believers is guilty of kicking against the goads.

The truth of this statement is evidenced by the fact that not all denominations and belief systems can all be correct.

Jesus said, “I am the way, the truth, and the life. No one comes to the Father except through Me. If you had known Me, you would have known My Father also; and from now on you know Him and have seen Him.” (John 14:6-7)

Let Jesus himself teach you and guide your life. To resist, deny, or commit heresies against Jesus, is veering so far into the Bad Idea Lane I can’t see how you won’t hit the ditch and flip.

Whoever loves instruction loves knowledge, But he who hates correction is stupid. (Proverbs 12:1)

“It is hard for you to kick against the goads.”

Wordsmith for the Lord. Scribing Some Jesus Things as spiritual food to the Saints, and all mortally wounded souls yearning for the Bread of Life. May my ink stain all hidden sin; revealed in the light of Christ. Be a Blessing and Be Blessed.